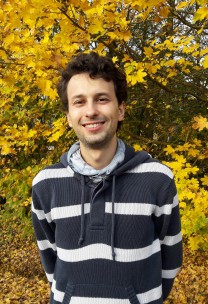 I am a postdoc (wissenschaftlicher Mitarbeiter) at the University of Heidelberg in the group of Alexander Schmidt. My research areas are the arithmetic of abelian varieties, especially the theory of complex multiplication, Shimura varieties, and related topics.

Until 2019, I did my PhD under the supervision of Tony Scholl at the University of Cambridge. In my thesis I studied extra “plectic” Galois actions on Hilbert modular varieties.

Next term (SS 2021) I will give the lecture Arithmetic of Elliptic Curves. The announcement is here. If you are interested, please subscribe via MÜSLI.

This term (WS 2020/21) I am Obertutor for the lecture Algebra 1. Moreover, together with Christian Dahlhausen I am supervising the proseminar -adische Zahlen. For details and past teaching, click here.

During my PhD I participated in several reading groups about number-theoretic topics. Details can be found here.

Here you can find a list of talks I have given at research seminars and conferences:

Here is a list of conferences and workshops I attended/plan to attend.

I am also frequently participating in the ‘Kleine AG’. Topics include for example:

Other stuff I have written

Thanks to Sam Power for his help and advice on creating this webpage.